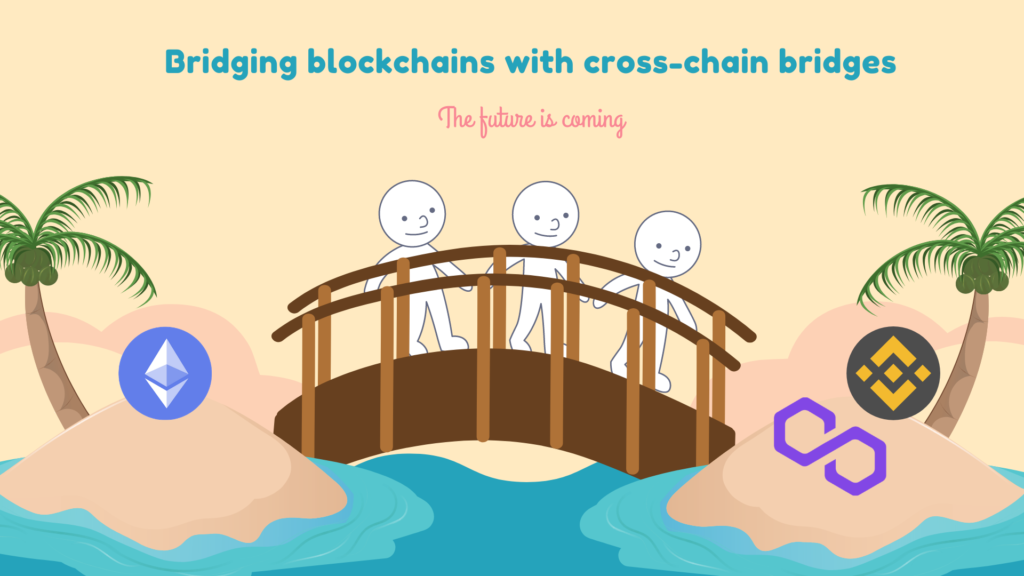 The blockchain space is growing rapidly and is spreading like wildfire. It closely resembles the path of early computer networks and how they eventually evolved and started to connect together to form the internet. In this post, we will talk about cross-chain bridges. We will talk about what they are and how blockchains relate to the early days of computer networks & the internet.

A short briefing on the history of the internet

Because of this, Paul Baran at the Rand Institute in 1964 started to investigate a new method for communications called packet switching. Unknowingly to him, two other groups were also investigating this communication method at the time.

These ideas of packet switching eventually evolved into the world’s first computer network called ARPAnet. ARPAnet saw its first packets transferred in 1967 and was the precursor to today’s internet. By the end of 1969, there were a total of 4 nodes on the ARPA network and this eventually grew to 15 by 1972.

By the mid-1970s a few other computer networks started to form, one of them ALOHANet was a microwave network used for linking universities in Hawaii. By the end of the 1970s ARPAnet had approximately 200 network hosts and in the 1980s the networks grew exponentially. At this time, the networks were not connected to each other, and because of this, they could not communicate with each other either. Eventually, most networks found a way to connect to each other and formed the internet that we use today. That’s why the internet is often referred to as a network of networks because that’s exactly what it is. The internet could not exist in its current form if it wasn’t decentralized like this and the same will happen for blockchains, in fact, it’s already starting to happen.

Comparing blockchains to the internet

As most of us already know, the first decentralized blockchain network is Bitcoin. It first came to existence on 3rd January 2009 when its creator Satoshi Nakamoto mined the first Bitcoin block. A couple of years later, in 2011 Litecoin and a few other cryptocurrencies launched their decentralized blockchain networks. I remember some of the first ones I saw, probably sometime around 2013 were Namecoin, Peercoin, Feathercoin, Worldcoin, Maxcoin, etc… Some of them actually trying to solve some real-world problems while others just being traditional money grabs.

Connecting blockchains to each other is not an easy task and that’s why blockchain engineers have worked hard to try to solve this problem for many years already.

Why blockchains need to communicate

A big problem for blockchains is their ability to scale. Blockchains are slow, I mean really slow. If we want a future where everyone is using this tech we need the ability to scale. One possibility to scale is to have many blockchain networks where users are spread out between them. More and more people have started to realize that there won’t be only one blockchain that solves all of the problems. Just like computer networks, we need lots of them and they need to be able to communicate in some way or the other.

The current hype is all about decentralized finance and decentralized applications. These apps first started to appear on the Ethereum network and the growth has been exponential. This has caused the Ethereum network to become extremely congested and high transaction fees are a natural symptom of this. This is why many users have abandoned Ethereum for now and migrated over to other networks like Binance smart chain and Polygon where the fees are extremely low in comparison. The users that have already done this migration have successfully transferred value from Ethereum to these chains by using different types of Cross-chain bridges or centralized services.

Cross-chain bridges are the future of the industry

The current state of cross-chain bridges is that they successfully manage to transfer value between blockchains. There are many different implementations right now and we will continue to see more implementations in the future. We have already written about one bridge between Binance smart chain (BSC) & Polygon, if you’re interested you can read about it here.

Unlike computer networks, where bridging data and connecting to servers and services on remote networks is completely seamless for the end-user. We have not quite reached that state yet when it comes to transferring value between blockchains. Right now we need to initiate and perform these steps manually. Someday these transfers will probably be completely seamless for end users, just like the data transfers on traditional computer networks are today.

I started my journey in blockchain at the beginning of 2013. Comparing the industry back then to what it is now is just mind-blowing. However, I think the coming 10 years will be even more mind-blowing, we’ve seen nothing yet!